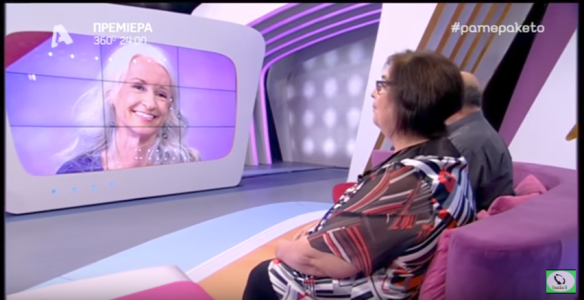 In my last blog, A Cretan Story, I mentioned the Greek TV show “Pame Paketo” (Πάμε Πακέτο), who I’d contacted as they help connect one with ‘lost’ people from the past. I’d emailed them in early September about wanting to find Manolis Anitsakis or someone in his family. Manolis was the man who took care of me and my brother while my mother was in hospital after the car accident, the man who’d found us an apartment to live in, the man who’d bought me a puppy and a hedgehog and who fed me kadaifi and baklava in his family’s café. Within a few days Annita, one of the Pame Paketo team, replied to me via Facebook and said they would like to do a story, which meant they found someone. I did not know who. Over the next days I chatted at length to Annita. She wanted to know everything I remembered, asked me if I’d be willing to go to Athens in a couple of weeks to record the show. The thought overwhelmed me, as this would be just a few days before my planned-for trip to Chania. David was away, I couldn’t find a cat sitter, my health was particularly low. And a reality TV show? It just didn’t seem the kind of experience I was destined for. But I said yes, of course, thinking what HAD I got myself into.

Well, this for starters… 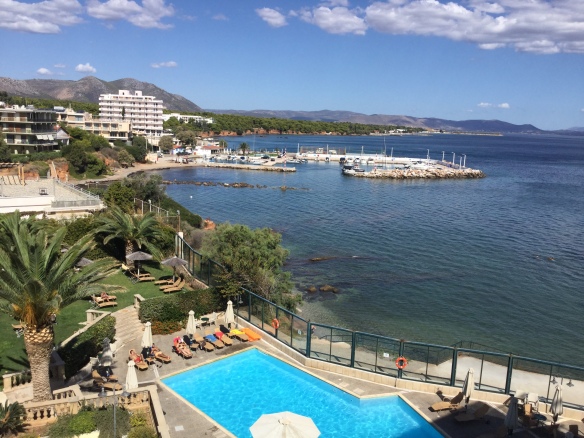 My hotel was by the sea, with a spa and a pool and a great breakfast buffet. I slept and swam and let the sauna get me into some kind of presentable shape for filming the following evening.

At the Pame Paketo studios, my first hours were spent sequestered away in a small room with my translator George Fassoulakis. The other ‘story’ on the show was being filmed. I wasn’t to leave the room, as whoever they’d found was also in the building, and we were not to cross paths until the show.  I was brought a substantial salad and coffee and endless sweet cakes. George and I chatted. I learned he spoke 5 languages and translated for the UN in Brussels. At some point I was ushered into hair and make up looking like one person, and then ushered back to the small room looking like another. Finally we were ‘on’…

Everything is in Greek (other than when I speak) but if you listen closely you can hear George doing simultaneous translation – I now have a profound appreciation of this skill.

As is revealed to me on the show, Manolis died from cancer in the 70’s, only ten years after my father died (more about this here). Manolis did not marry, but he had two sisters, who’d also died. But the sisters each had one child, Stella and Mihalis. This is surprise ‘meet’ on the show, Manolis’ niece and nephew. In the “Paketo” (packet – the enormous white box) that Stella opens is the obituary of my father written by Manolis, and a gift I’d chosen for Manolis or whoever Pame Paketo would find: a pair of silver cufflinks my mother made some years ago. Neither Stella nor Mihalis knew who they would meet, only that it was someone asking about their uncle Manolis.

As they read the obituary, they began to remember. Stella remembered a dinner with my parents; she remembered that Manolis was distressed he had to leave Chania for a few days, and so she took his place at my mother’s bedside in the hospital. I did not get to meet Manolis, but to meet Stella and Mihalis, who’d been there then, who were a part of my ‘lost’ history – well, it felt like a another strand woven in the net beneath me that has been forming ever since my visits to Chania, a net that will catch me if I ever fell. I have realised that most of my life I have been floating in space without a way to get back to the mother-ship, without anything to catch me if I fell to earth, but now there is a way back  –  tentative and delicate, but definitely there.

And then it was a wrap and everyone was pressed into the night. Stella and Mihalis and I promised to meet again in Chania, which did, a week later. 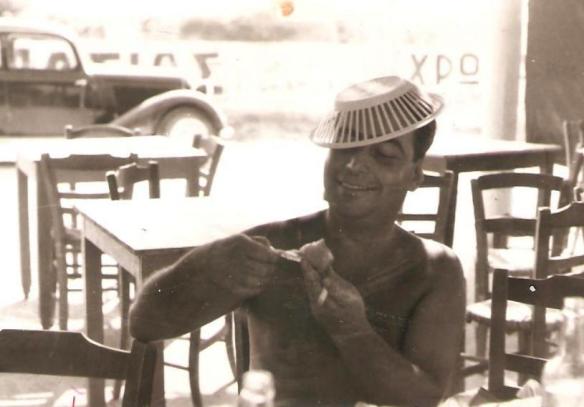 The show had a section of me being shown photographs of Manolis that I’d never seen, it was very moving for me. 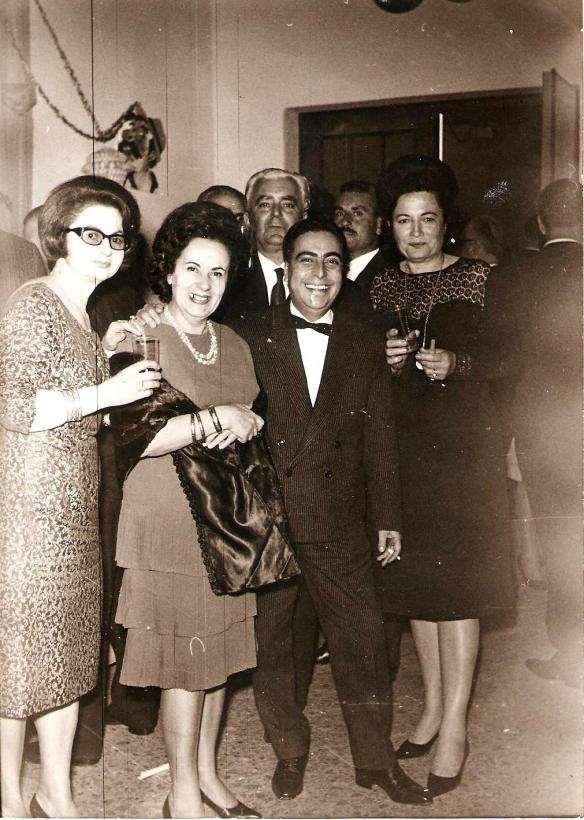 Manolis Anitsakis (the woman second from left was Manolis’s first cousin, Marika Vlassopoulou, who was a writer and general director of broadcasting)

I was flown back home the next day, but not before I managed to have lunch with my ex step-aunt for the first time in over forty years, and then coffee with my ex step-father, also for the first time in over forty years. He came to Athens airport to meet me, and we sat perched on uncomfortable chairs, while around us travellers dragged their hand luggage to departure gates or stared glassy-eyed at flight information displays. My step-father and I caught up as best we could given the circumstances. I almost missed my flight.

The whole experience felt like I’d slipped briefly into another dimension, one which still exists out there,  just waiting for me to return. And I can feel those strands, connecting me to the mother-ship. Thank you Pame Paketo for your part in this.

I’m still looking for three of the people who were in the car accident: an American couple, and a Greek man, whose first name I believe was Costas. I’d also like to meet Mihalis, who played with my brother. A son of a fisherman. Mihalis was about eighteen then (1968/9), so in his mid sixties now. Perhaps another show…

5 thoughts on “A new career in Greek Reality TV?”

This site uses Akismet to reduce spam. Learn how your comment data is processed.